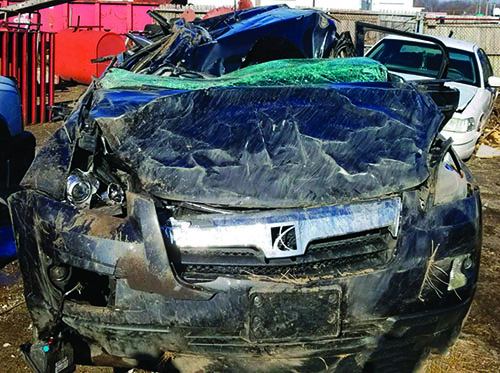 There are so many types of traumas. I believe that everyone experiences trauma of one kind or another many times throughout life. We learn to pick up the pieces and move on. We have to, as life continues to move forward. Circumstances change and evolve. With that, our attitudes, beliefs, and even values can change.

Things we think are concrete, dependable, and predictable can change in an instant, throwing our lives into chaos that we don’t necessarily know how to process and cope with.

Trauma has many forms. The small things we think don’t affect us, really do in little ways. We take a small detour. We may not even notice it, but it’s there. The bigger ones force us to realign, navigate unfamiliar territory. I have found that I must be open to processes that I never dreamed I would find myself involved in.

Being a parent, as parents find out, changes your life completely. Is it a trauma to become a parent? Maybe. Is it rewarding? Absolutely. Is it painful? Yes, yes it is! Can’t avoid the pain of becoming a mom physically! When I was pregnant, the physical pain was the biggest thing I was worried about! Little did I know, emotional pain would eclipse what my body went through for just one day.

New parents navigate being new parents by trial and error. You learn as you go. Just as your children form their own thoughts and grow into the family. We thought we did alright with our two. First a son, followed fourteen months later by a daughter. I must also state that I was an older mom, having my son at age thirty-five and daughter at thirty-six.

Maybe we were behind the times a little bit, not as up on things as younger parents. Maybe that’s when we didn’t recognize that our son was experimenting with marijuana. I promise you I had no idea whatsoever that my son was using pot, dabbling with other drugs, and drinking! He came out as gay when he was thirteen, and we were navigating that change in his life and ours as well.

Small town life can be much harder on kids when you’re different than everyone else around you. I look back and recall fighting battles for my son. Protecting him as best I could from the bullies and from feeling so alone. My husband and I both encouraged him to come to us with any problem. We promised we would not be angry with him. We’d listen and help. We had many conversations, and we both thought things were ok with our son. We moved forward, facing each challenge, working through those teenage years with him.

As I tried my best to roll with the punches for Dawson, I dealt with being the mom of a gay son in the best way I knew how. I was so proud of him for being true to who he was. I also would wonder what his life would have been like if he wasn’t gay. I silently pondered what other moms felt. Moms who sons weren’t gay. But rather football stars, or scholars, or popular. Did they take it for granted when they’d have a weekend with a houseful of rowdy boys, playing sports or hanging out. Dawson never experienced friendship with any boys. Not ever. Another trauma as my heart broke for my son. I would try to help him not notice that he was alone most of the time. I know he did notice though—and he did something about it.

Instead of coming to us and talking about how he felt, he gravitated toward other misfit kids and started smoking pot, cigarettes, using alcohol and who knows what else. We had no idea.

Finally, it was time to send him off to college. We had hopes that he’d find his way there. Be ok, make friends in a bigger town and be alright. We had no way to know just how deep his trauma was from all he’d experienced as a child. His traumas were mounting, and all of our lives were about to change.

Fast forward a year and a half. Dawson had flunked out of college, become a major pot smoker, and was back here at home. Traumas right and left, trying to figure him out keep us afloat, and encourage our daughter who was more determined than ever to accomplish every goal she ever set and go to college herself and away from here.

Dawson had a car accident in late December of 2018. He nearly died. He had a brain injury that left him in a coma for nearly two weeks. This happened the day after he turned twenty. He was on his way here to get birthday money, which he would have spent on marijuana immediately. Our lives were turned upside down in a split second. We thought we had experienced major trauma with him already. But we had no idea up until this point, how much trauma we would actually face.

Months of hospitalization and a rehab facility out of state nearly brought our family to its collective knees. Dawson has some permanent brain damage from the choices and decisions he made. Coping with daily life for all of us was all we could manage to do. We thought we were ok. Then we were thrown for a loop again when Dawson made the decision to use marijuana again.

The day I caught him in his room smoking pot came about three days after he’d returned from the out of state neuro rehab facility. The sight of him on his bed, pipe in hand, sent me into a fury I’d never felt before. I think this has remained the biggest trauma of my life to this day.

Like each one of us, I have had many traumas in my life to sort through. I was adopted, big trauma there; raped at thirteen, huge trauma; abused by my ex-husband, horrible trauma. So many things. But until I found my son, recovering from a horrific accident, smoking pot, which is what caused him to wreck his car in the first place, I have never felt the anger and frustration explode like that before.

After that day, we navigated next steps and sent him to a rehab for drug use for ninety days out of state. We spent a week there for family therapy as part of the rehab program. We discussed traumas at length in group and individual therapy. There was a lot of ugliness. Tears, yelling, hugging. Purging of all the traumas we could recall and regrouping as individuals and as a family.

It was cathartic, but not permanent. Which brings me to my questions to all of you.

What do you do to help yourself deal with trauma? With anxiety? Depression? Are drugs the answer? I don’t want that to be the answer. I want to be involved with others, to learn, focus, and lift one another up out of the ramifications of traumas. We all deserve to be healthy and happy. Life is hard enough.

Next time I’d like to discuss what people do to help themselves move forward. Is it medication? Is it religion? Therapy? Maybe education? Maybe all of these things? What’s healthy, and what isn’t?